CALL 911 OR YOUR LOCAL HEALTH CARE PROVIDER IMMEDIATELY IF YOU SUSPECT SHELLFISH POISONING. 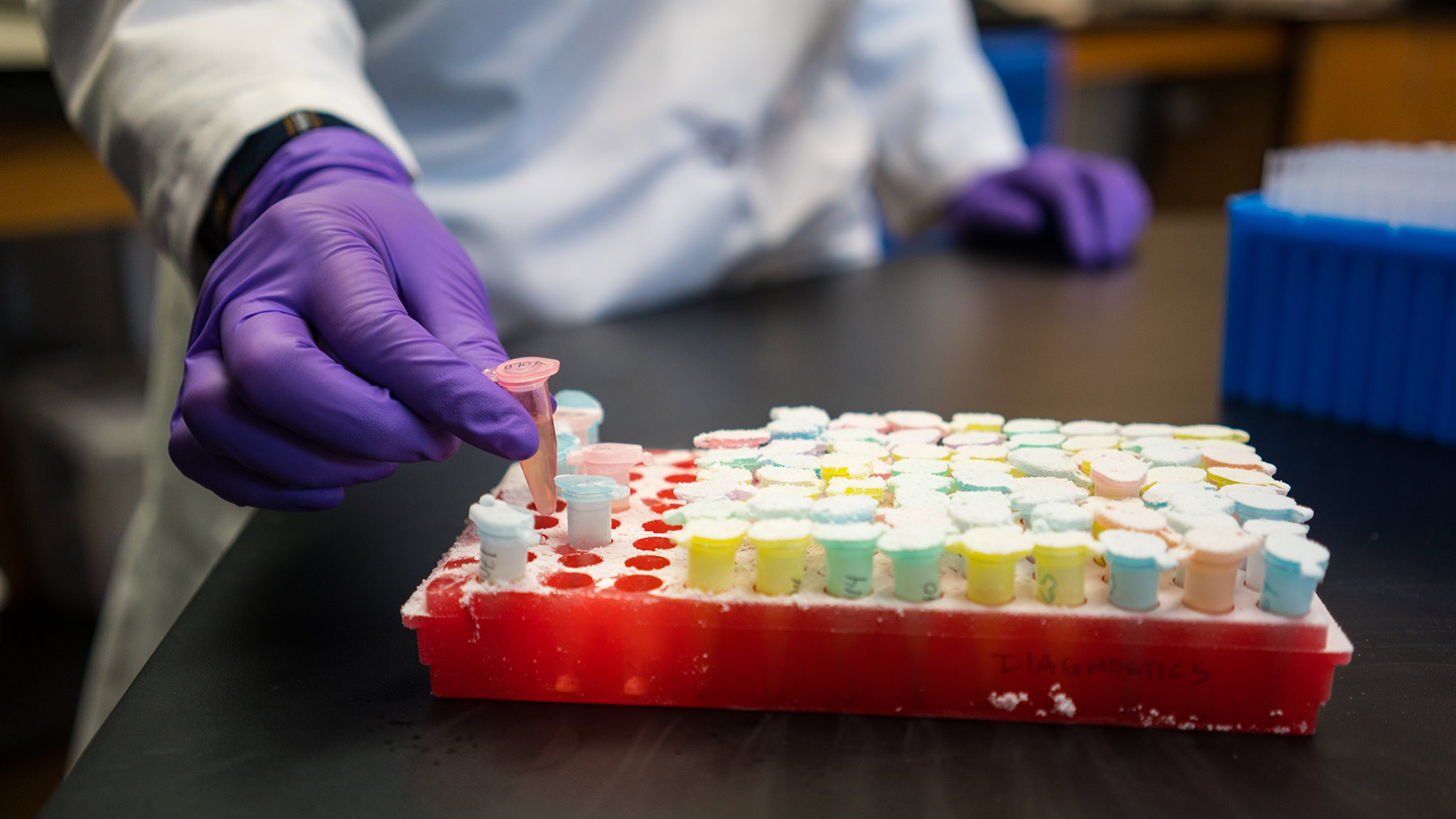 Interns with the Sitka Tribe select frozen saxitoxin extracts for analysis. Photo by Bethany Goodrich
Various programs and researchers in Alaska monitor for Harmful Algal Blooms (HABs) in different ways. Some programs are collecting phytoplankton samples to look for the harmful species, whereas other programs are only collecting shellfish to test for the toxins these harmful phytoplankton species produce. Some programs do a combination of these two monitoring methods. Monitoring phytoplankton can provide a heads up to managers that shellfish may be accumulating the toxins. Before human consumption, however, managers and public health organizations must also test the shellfish since different shellfish species accumulate the toxins from phytoplankton at different rates.

Alaska is a large state with a large amount of coastline and concentrated areas of people. The State of Alaska monitors and regulates the commercial shellfish industry, yet does not monitor or regulate shellfish for subsistence or recreational harvest. Due to these challenges, regional monitoring programs in Southeast, Southcentral, and in the Aleutians have begun to fill the monitoring void. Each regional organization is working to reduce the risks of HABs through phytoplankton monitoring, shellfish testing, or both, but due to the remoteness of communities and funding limitations full monitoring coverage can be inconsistent. 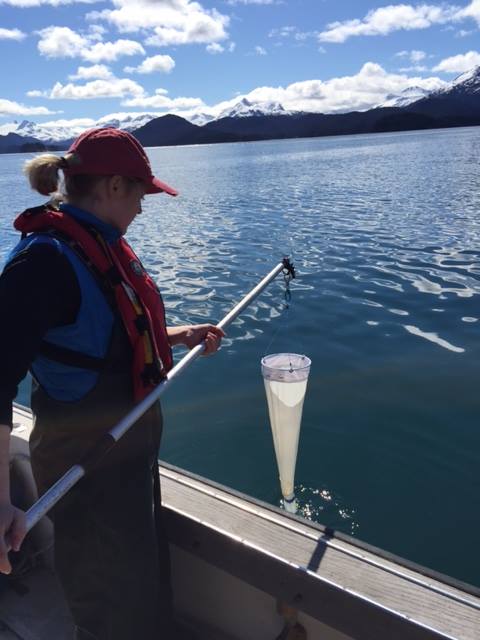 Phytoplankton monitoring in Alaska takes one of two different forms:qualitative monitoring suitable for citizen involvement or high-precision, quantitative monitoring research on harmful algal blooms. In the first method, used by SEATOR and KBNERR, a network of volunteers or employees follow a protocol designed by NOAA’s Phytoplankton Monitoring Network. Each week, samplers horizontally tow a 20 micron phytoplankton net for three minutes at their site, typically a dock or a local beach, while also collecting air and water temperature and other environmental data. The sample is then analyzed under a microscope and abundance of each HAB species is qualitatively classified (e.g. “present”, “abundant”, or “bloom”). Plankton observations are uploaded to a shared database and local managers and public health organizations are notified of any concerning samples. The advantages of qualitative phytoplankton monitoring are the low equipment costs, easy volunteer training, and quick sample analysis, so it is easily implemented across many communities or throughout an area, but the lack of quantitative data makes it less effective for predicting actual toxin levels from a HAB.

For research purposes, quantitative phytoplankton monitoring using official cell counts is best. Quantitative monitoring in Alaska is primarily done by the Kasitsna Bay Laboratory in Southcentral and post-doctoral researcher Elizabeth Tobin in Southeast. For quantitative monitoring, phytoplankton cells are concentrated from a known volume of seawater. A sample is then placed in a specialized slide under a microscope and the target cells are counted, giving a concentration of cells in the water column. Quantitative monitoring is instrumental to understanding HAB initiation and duration since minor differences in cell abundance can then be matched with oceanographic parameters, but time investment and training needed is out of reach for most citizen scientists, so it can be a challenge to analyze more than a few locations. 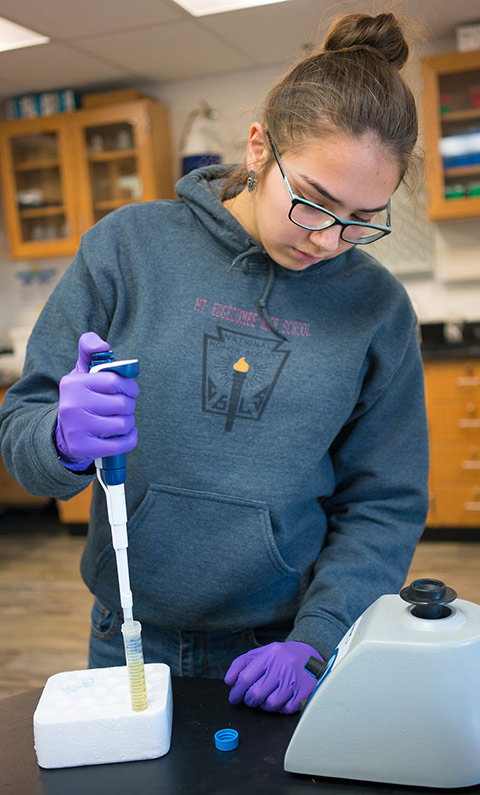 An intern with the Sitka Tribe prepares a shellfish sample for toxin analysis. Photo by Bethany Goodrich

Phytoplankton monitoring is an important early warning for shellfish toxins, but the only way to be sure that shellfish are safe is to routinely test them as well. As with phytoplankton monitoring methods, shellfish testing in Alaska can also be split into public health techniques and research-centric techniques. For public health, shellfish testing needs to be fast, capable of capturing the full toxicity of a sample, cost-effective, and targeted toward the species that will be consumed. Since toxin results are extremely time sensitive for all three harvesting groups, the Mouse Bioassay or Receptor Binding Assay (RBA) are the preferred methods for paralytic shellfish toxin testing, since both are high-throughput, total toxicity tests. The mouse bioassay is currently approved by the FDA for all interstate, commercial shellfish testing, while the RBA is approved for non-commercial monitoring, precautionary commercial closures, and commercial blue mussels and is in review for commercial geoducks and oysters. In these methods, a sample of at least 100 grams of shellfish tissue (about the weight of a deck of cards) is blended into a slurry. The toxins are then extracted from the shellfish slurry and further analyzed for a total toxicity value, typically expressed in micrograms of saxitoxin equivalent per 100 grams of shellfish. The mouse bioassay and RBA do not produce a toxin profile (e.g. 10% saxitoxin, 90% neosaxitoxin), and instead produce an total toxicity value that can be directly compared to the FDA regulatory limit of 80 micrograms of saxitoxin equivalent per 100 grams of shellfish tissue.

For researchers, the toxin profile of a given shellfish sample can provide important information about which HAB species are producing the bloom or how potent the toxins are. For those measurements, high performance liquid chromatography (HPLC) or liquid chromatography – tandem mass spectrometry (LC-MS/MS) are the preferred methods. While the HPLC is an FDA-approved regulatory method for commercially harvested shellfish, the higher cost of HPLC testing and longer testing time mean that most states, including Alaska, use the mouse bioassay for commercial management. HPLC and LC-MS/MS tests separate the paralytic shellfish toxins into their constituent parts by running the toxins through specialized columns that force molecules with certain properties to travel faster or slower through the column, much like drawing water up through tissue paper will separate ink into its constituent colors. The individual compounds are then analyzed and identified. As with the mouse bioassay and RBA, results can then be communicated in micrograms of saxitoxin equivalents per 100 grams of shellfish tissue. but HPLC and LC-MS/MS data can also be presented as a full toxin profile.